Digitalization and Economic Performance of Two Fast-Growing Asian Economies: India and the People’s Republic of China (2021) 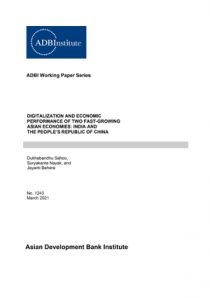 We identify the role of digitalization and infrastructure in two fast-growing Asian economies, namely India and the People’s Republic of China (PRC), within the growth framework from1990 to 2019 by using panel 2SLS and the NARDL technique. The results show that internet and mobile density (a proxy for telecommunication infrastructure/digitization), expected years of schooling (a proxy for human capital), foreign direct investment inflow, gross capital formation, per capita electricity power consumption (a proxy for electricity infrastructure), research and development expenditure, and the consumer price index have a positive impact on the per capita GDP of India and the PRC. Further, the study reveals that the PRC extracts relatively more from these growth-promoting factors than India, probably indicating greater allocative efficiency. The results imply the need to enhance the digitization movement in both economies and transform the population into human resources so that the higher research and development expenditure can exert the greatest possible positive effect on economic performance.